A team of researchers at Virginia Commonwealth University and the University of Kentucky set out to explore what mechanisms might explain why certain people with psychopathic traits are able to successfully control their antisocial tendencies while others are not. Using neuroimaging technology, they investigated the possibility that “successful” psychopathic individuals — those who control their antisocial tendencies — have more developed neural structures that promote self-regulation.

Over two structural MRI studies of “successful” psychopathic individuals, the researchers found that participants had greater levels of gray matter density in the ventrolateral prefrontal cortex, one of the brain regions involved in self-regulatory processes, including the down-regulation of more primitive and reactive emotions, such as fear or anger.

“Our findings indicating that this region is denser in people higher on certain psychopathic traits suggests that these individuals may have a greater capacity for self-control,” said Emily Lasko, a doctoral student in the Department of Psychology in VCU’s College of Humanities and Sciences, who led the study. “This is important because it is some of the first evidence pointing us to a biological mechanism that can potentially explain how some psychopathic people are able to be ‘successful’ whereas others aren’t.”

The team’s findings will be described in an article, “An Investigation of the Relationship Between Psychopathy and Greater Gray Matter Density in Lateral Prefrontal Cortex,” that will be published in a forthcoming edition of the journal Personality Neuroscience. A preprint version of the article has been posted online. 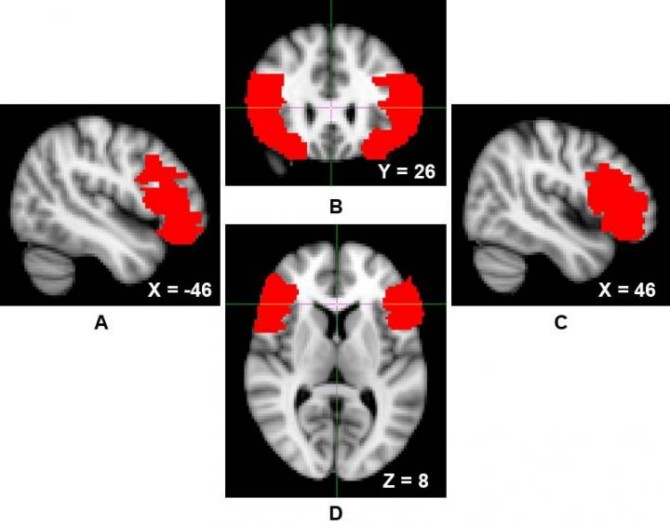 Over two structural MRI studies of ‘successful’ psychopathic individuals, the researchers found that participants had greater levels of gray matter density in the ventrolateral prefrontal cortex, one of the brain regions involved in self-regulatory processes. (Credit: VCU)

The first study involved 80 adults in long-term relationships who were placed in an MRI scanner at VCU’s Collaborative Advanced Research Imaging center, where researchers took a high-resolution scan of their brain. Afterwards, participants completed a battery of questionnaires, including one that measured the “dark triad” of personality traits, individually assessing psychopathy (e.g., “it’s true that I can be mean to others”), narcissism (e.g., “I like to get acquainted with important people”), and Machiavellianism (e.g., “it’s not wise to tell your secrets”).

The second looked at another “successful” population: undergraduate students. The researchers recruited 64 undergraduate students who were assessed for psychopathic traits and tendencies using an assessment tool designed for use in community and student populations, measuring primary psychopathy (e.g., “I enjoy manipulating other people’s feelings”) and secondary psychopathy (e.g., “I quickly lose interest in the tasks I start”). The participants were then scanned at the University of Kentucky’s Magnetic Resonance Imaging and Spectroscopy Center.

In both studies, the researchers observed that gray matter density in the ventrolateral prefrontal cortex — which the researchers call “a hub for self-regulation” — was positively associated with psychopathic traits.

The researchers say their findings support a compensatory model of psychopathy, in which “successful” psychopathic individuals develop inhibitory mechanisms to compensate for their antisocial tendencies.

“Most neuroscientific models of psychopathy emphasize deficits in brain structure and function. These new findings lend preliminary support to the growing notion that psychopathic individuals have some advantages compared to others, not just deficiencies,” said study co-author David Chester, Ph.D., an assistant professor in the Department of Psychology who runs the Social Psychology and Neuroscience Lab, which conducts research on psychopathy, aggression and why people try to harm others.

Across the two samples of individuals who varied widely in their psychopathic tendencies, Chester said, the team found greater structural integrity in brain regions that facilitate impulse control.

“Such neural advantages may allow psychopathic individuals to counteract their selfish and hostile tendencies, allowing them to coexist with others in spite of their antisocial impulses,” he said. “To fully understand and effectively treat psychopathic traits in the human population, we need to understand both the shortfalls and the surpluses inherent in psychopathy. These new results are an important, though preliminary, step in that direction.”

The compensatory model of psychopathy offers a more optimistic alternative to the traditional view that focuses more on the deficits associated with psychopathy, Lasko said. The finding that the ventrolateral prefrontal cortex is denser in these individuals lends support for the compensatory model because that region is linked to self-regulatory and inhibitory behaviors, she said.

“Psychopathy is a highly nuanced construct and this framework helps to acknowledge those nuances,” she said. “People high in psychopathy have ‘dark’ impulses, but some of these individuals are able to either inhibit them or find a socially acceptable outlet for them. The compensatory model posits that these individuals have enhanced self-regulation abilities, which are able to compensate for their antisocial impulses and facilitate their ‘success.’”

Past research has indicated that approximately 1% of the general population, and 15% to 25% of incarcerated people, would meet the clinical criteria for psychopathy. By gaining a deeper understanding of the neurological advantages associated with “successful” psychopathic individuals, researchers may unlock new treatments and rehabilitation strategies for them, Lasko said.

“We believe that it is critical to understand these potential ‘advantages’ because if we are able to identify biomarkers of psychopathy, and importantly, factors that could be informative in determining an individual’s potential for violent behavior and potential for rehabilitation, we will be better equipped to develop effective intervention and treatment strategies,” she said.

Lasko emphasized that the researchers’ findings are preliminary.

“Although the findings are novel and definitely provide a promising avenue for future research, they still need to be replicated,” she said. “They are also correlational so we currently aren’t able to make any causal inferences about the [ventrolateral prefrontal cortex]-psychopathy relationship.”

In addition to Lasko and Chester, the study involved Lasko’s fellow doctoral students in the Social Psychology and Neuroscience Lab: Alexandra Martelli and Samuel West; and C. Nathan Dewall, Ph.D., professor of psychology at the University of Kentucky. (Fuente: Virginia Commonwealth University)